25 years ago, attitudes concerning renewable energy started to change as environmental concerns became more apparent. Coupled with the scarcity of natural resources; technological advancements made a large push to create new and more convenient ways of obtaining renewable energy like wind power, hydroelectric power, or even solar power in homes and businesses. The long-time use of the combustion engine was in need of an upgrade and in the 1990s; the world was introduced to the first-ever fuel cell electric engine for commercial automobiles. Demonstrated by the U.S. Department of Energy and Arthur D. Little management consulting firm in conjunction with Plug Power and the Energy Department’s Los Alamos National Laboratory in 1997, the fuel cell managed to generate electricity using oxygen from the air and compressed hydrogen.

Since its first commercial use more than 20 years ago, the fuel cell has managed to spread into public and corporate usage for large scale operations. A new “tri-generation” fuel cell and hydrogen energy station in California can not only produce transportation fuel for dozens of electric cars each day, but also electrical power for a nearby industrial facility. The fuel cell has been an important step for alternative and renewable energy since it has helped bring more mainstream attention to “green” technologies that can affect larger populations and facilities.

Companies are now constantly looking for new ways to utilize other forms of alternative energy, like solar power- which is being used by homes and businesses to power various appliances. Solar panels, which are made up of a series of small semiconductors, can convert direct sunlight particles into electrons and can then be converted into electricity. This electricity can then be sent directly into fuse boxes to power applications such as HVAC, lighting fixtures, charging stations for electric vehicles and more. Over the years, solar cells have been made with different material including different types of silicon, which has led to improved efficiency in capturing and converting sunlight. Early silicon solar cells had 6 percent efficiency in the 1950’s but now reach more than 44 percent in recent years- meaning higher sunlight absorption and increased electricity wattage. Furthermore, the creation of the energy storage battery means gives homes and businesses the ability to use solar energy to power their facilities at any time of the day, not just when the sun is shining. 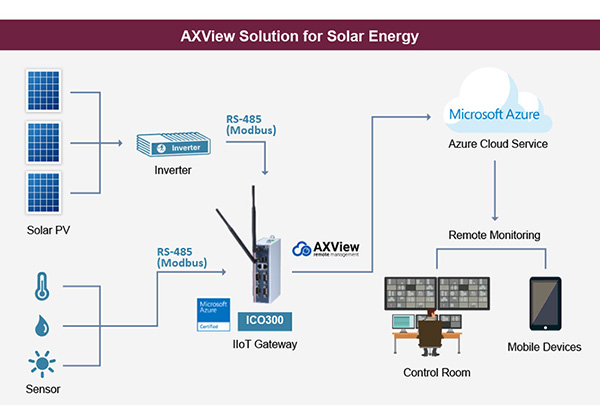 In view of the growing need to commercialize solar energy, Axiomtek has deployed ICO300, its embedded system, and AXView, its own proprietary software, to form the brain of an intelligent gateway. Shown in Diagram is the architecture of a solution for a solar energy station, including the front end at a solar station, an Axiomtek’s intelligent controlling unit in the middle (including hardware and software), and a cloud at the far end.

At the front end, ambient solar panels are grouped together as a solar PV array before connected to PV inverters which then convert the variable direct current (DC) output of a solar PV array into the alternating current (AC) that can be fed into commercial electrical grid or used by a local network. Through RS-485 interface, the ICO300 gateway is connected to PV inverters via Modbus protocol, while the AXView on the brain of a solar station is collecting data, such as voltage, current, sunlight intensity, temperature and humidity, which then is sent to the Microsoft Azure cloud at the far end via 3G or Wi-Fi for display or analytics. 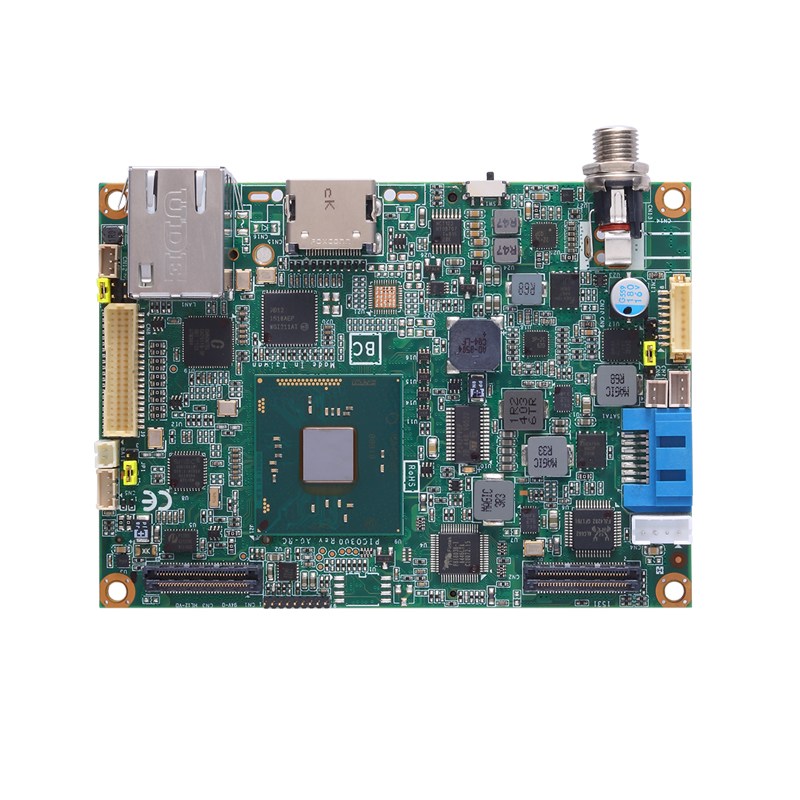 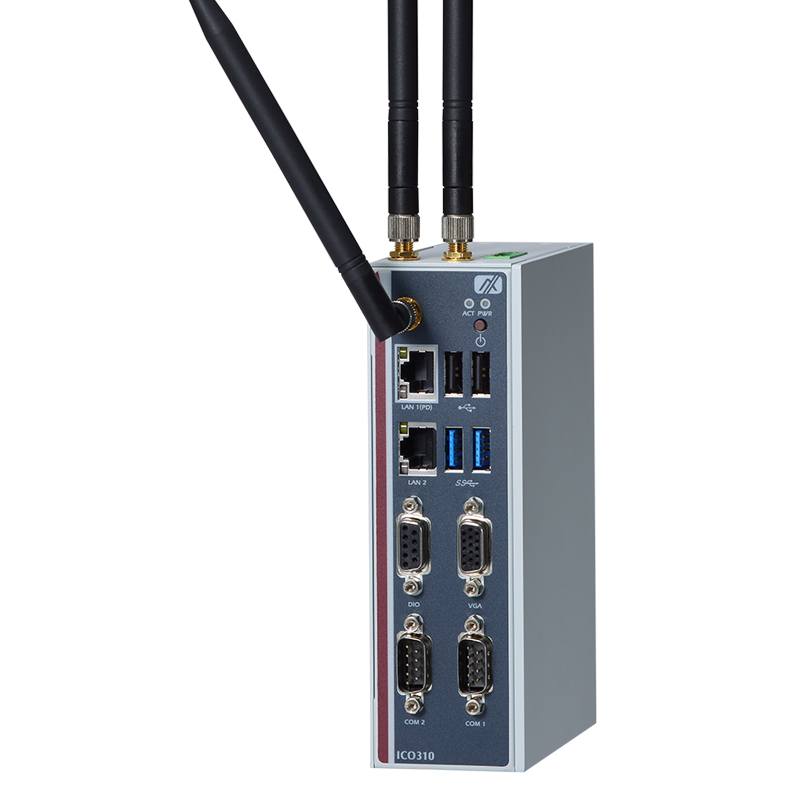